He had a bit of a reputation for going out hard from the gun - sometimes he was just plain silly, like when he went through 2 miles in the Great North Run in 9.30 mins, still in the leading group!!

This runner also did a bit of track racing and trained twice a week on the track with a 800m/1500m group. His track racing was based on strength rather than speed - he still ran long fell races, mountain marathons and LDWA events over 25 miles, as well as road racing and orienteering events - in fact, a bit of a jack-of-all-trades (and master of none!).

So when racing 800m or 1500m on the track, our runner had to go out hard from the start. This meant that a hard start in road races actually felt comfortable - 5 minute miling compared to 4.15 minute miling - at least early on! Then he would drift back through the field.

After a few years of racing like this, our runner gradually eased back from a fast start, tr…
1 comment
Read more

And now for something completely different..... 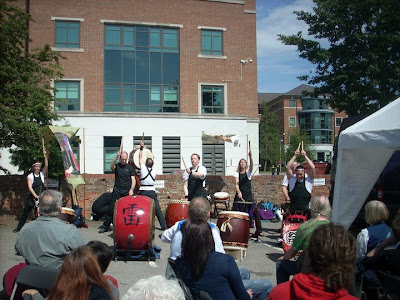 Ever since I saw Michael Palin visit the group Kodo in Japan as part of his Full Circle trip, I have had an interest in Japanaese Taiko Drumming.
Over the years, I have seen several groups in concert, in particlar the UK based Mugenkyo, who I have seen probably once a year for nearly 10 years.
Anyway, at one of their concerts, their leader Neil mentioned that the group run weekend workshops in a training centre in Lanarkshire. I mentoned this back home and I was given permission (!) to sign up.
So in 2010, I actually went on 3 weekends, and thoroughly enjoyed myself! On the third weekend, I was given an e:mail address of a group based in York, so just before Christmas 2010, I went along to one of their practice sessions.
Since then, I have practised with them on a weekly basis, and had some great experiences performing over the last year:
- at the York Railway Museum over Easter 2011, as part of the Japanese fortnight, celebrating the arrival of the Shincasen train at the museum
- at the Bl…
Post a comment
Read more

August 17, 2011
I was reading through various posts on 'Nopesport' the other day, with particular reference to the recent 'Scottish 6-Days' event, and read one post by 'AlanB' which struck a chord, as someone who has been involved with organising larger orienteering events, and I quote verbatum:

'my other main responsibility, as a competitor, was to make life as easy as possible for the volunteers ....... That included arriving at each site in the direction laid down in advance, parking where I was told, and responding positively to any last minute changes. Any slight inconvenience, or having to wait in traffic queues for whatever reason, was as nothing when compared to what the organisers must have been through.' 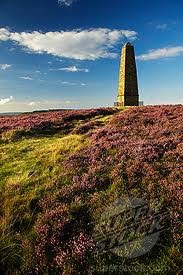 The brown course picked it's way through the nicest bits (though I was pleasantly surprised how runnable virtually the whole area was today - the right time of year?), with some good longer legs with route choice, and some technical stuff to catch out the unwary.

Another very steady run for me with all controls appearing where I wanted them to be. Really need to up the fitness level so that I can get my running speed closer to my orienteering speed!!
Post a comment
Read more

There must be something wrong with my orienteering technique because....

February 14, 2011
there was lots of comments, nay critiscm, of the map used for the recent CompassSport Cup round at Silton, but all of my controls appeared where I expected them to be!!
Post a comment
Read more

Orienteering should be enjoyable - well said that man! 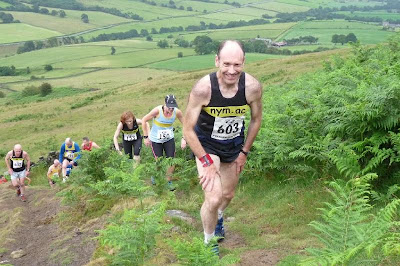 At the AGM of our Orienteering club last week (as part of the follow up to a motion last year on increasing membership and participation) we had a 'brainstorming' session. And there was one comment made which struck a cord with me - Orienteering should be enjoyable!!


(picture of the author in a fell race with a big silly grin on his face!)
Now what one person calls 'enjoyable' is not necessarily exactly what another would list, and it very much depends one each persons' perspective. For instance, a long way to the start for one person is ideal for a thorough warm up. For the younger and older participants, it might be as long as their course, so might seriously increase the physical challenge to their limits. And for parents with split start times, it can be very difficult. From my own family experience, a long walk to the start can sometimes mean we just don't go to the event.

Back in the Spring, I planned the courses for our club's annual Regional (Badge) event. The venue was Coate Moor, one of the Cleveland Hills which rise sharply up from the Tees Valley plain to over 1000ft. As the area includes grouse shooting moors, and lots of bracken, it is only available in February and March.

I had done some scouting around the area whilst planning a sprint race, so had some basic ideas about the courses. The mapper was plugging away.

Time constraints meant that my main planning visits were set for the Xmas/New Year period. But at the beginning of December, it snowed. And it continued to snow. And the snow stayed. Right through to the end of February - 3 weeks before the event!

So the controller and I did all of our work in the last few weeks before the event - no time to test run courses, just get the sites tagged and agreed. Tagging was done with 6 inches of snow on much of the area, and two weeks before the event we had to hurriedly leave the area in a hailsto…
Post a comment
Read more
More posts

cjw
I have been orienteering and running for 50 years. I'm now 61 and still doing both regularly!